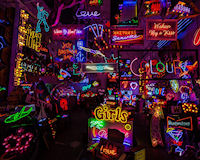 He's made, installed and collected signs that have appeared behind some of the greatest stars. Tom Cruise in Eyes Wide Shut, Johnny Depp in Charlie and the Chocolate Factory, Jack Nicholson in Batman are just a few that have appeared alongside the collection. When
the film is rapped neons are discarded like yesterdays newspapers, unwanted, unloved. Chris has collected these neon and bulb icons and salvages old neons and architectural advertising from the
streets before they disappear forever. Repaired and resurrected, coupled with quirky art and powered up to shine like jewels of light.

Last year it featured in TV legend Luther, and he had an installation in Selfridges.

Icons in their own right, Gods own junk yard where neon never dies. 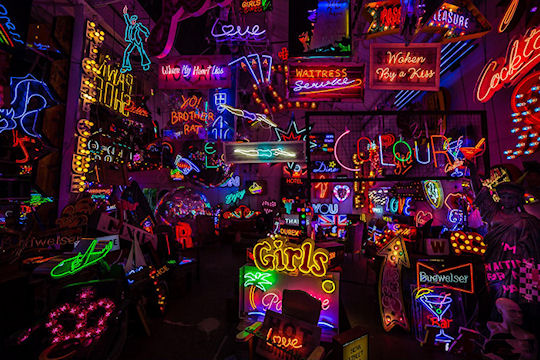