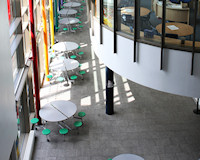 The school from Channel 4's Educating the East End.

The school opened in Waltham Forest in September 2008 as a coeducational secondary school, replacing both the older Warwick School for Boys and Aveling Park School.

The school is named after local inventor Frederick William Bremer, who invented Britain's first petrol driven car in 1892. It can still be seen in the Vestry Museum.