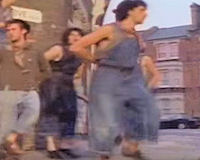 Description: This corner shop on Brook Drive in Kennington was the setting for the classic Dexy's Midnight Runners video shoot for they're 1982 hit 'Come On Eileen'.

The music video was directed by Julien Temple and is remembered for featuring members of the band wearing sleeveless shirts and dungarees.

The Eileen as featured in the video (and on the record sleeve) is Mire Fahey, sister of Siobhan Fahey, former singer with Bananarama and Shakespears Sister.

The American singer Johnnie Ray, an early crooner mentioned in the opening lyrics, is seen greeting his emotional fans at the beginning of the video using film footage of his arrival at Heathrow Airport in London in 1954.