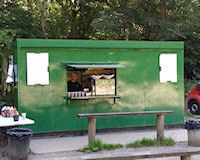 Description: This famous tea hut in High Beech, north of Chingford in Epping Forest is a famous stop off for travellers especially bikers in North East London.

It was opened in 1930 by Ernie Miller 2 years after speedway was first run nearby.

It has stayed in the family and the distinctive green hut has been called Popsies, Mins, Berts and now Bradleys. The only change was that it was recently moved 10 metres away to one side in order to save a nearby tree which was suffering from the footfall.

In 2014 it was under threat after the council put it's plot up for tender. A petition raised over 8000 signatures and after a concerted it's future was saved.

Scandinavian Food for All», 12.km

A Market going down in History», 13.km