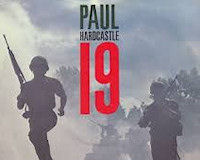 Description: Seminal Eighties anti-war hit '19' was recorded here by Paul Hardcastle. It was in his mother's living room that he famously used the short sample from Vietnam Requiem, a documentary about PTSD, specifically sampling the average age of a US soldier in Vietnam.

In 1985 the song spent five weeks at number one and became a massive hit around the world.

Paul Hardcastle has gone to become a jazz legend notching up 12 jazz chart topping singles in the US.

This is where David Bowie lived», 6.2km