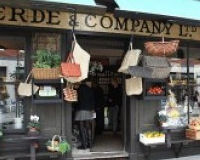 Description: This lovely East London cafe/deli near Spitalfields is run by author Jeanette Winterson, author of Oranges are Not the Only Fruit.

She bought the derelict building and set up home in the fine Georgian townhouse.

Later, she transformed the ground floor into an organic delicatessen called VerdeÃ¢â¬â ¢s in 2005 after being propositioned by a coffee company whose politics she disagreed with. She set about maintaining the traditional charms of the area with locally sourced organic produce.

A chap once popped by and said he used to work there when it had formerly housed the headquarters of an Orange importer called JW Fruits. In interview later she said So the house really did have my name on it.

Thus she went into business with New Yorker Harvey Cabaniss (a prodigy of Fergus Henderson) and a deli masterplan was born.