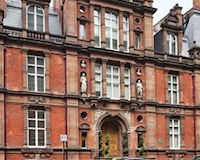 The Post war marriage venue of choice for the famous.

Description: Caxton Hall is a Grade II listed building that hosted many mainstream and fringe political and artistic events.

Most famously it was the site of the assassination of Michael O'Dwyer in 1940, former Lieutenant Governor of the Punjab in India by Indian nationalist Udham Singh, as an act of revenge for the 1919 Amritsar massacre.

The National Front, an openly neo-nazi British political party was formed at a meeting here on 7 February 1967.

The occultist Alister Crowley celebrated the Rites of Eleusis here in the hall with his associates in October and November, 1910.

The most famous marriage though was that of future Prime Minister Anthony Eden, who married the niece of the then Prime Minister Winston Churchill, Clarissa Spencer-Churchill here on 18 August 1952.

The plaque outside refers to the building role in the Second World War when it was used by the Ministry of Information for press conferences held by Winston Churchill and his ministers.

University with the most Celebs», 1.1km

Sylvia Queen of the Headhunters», 1.6km

Where Oscar Wilde was arrested», 1.0km