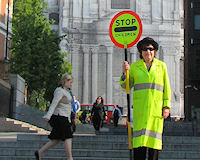 Description: Born in Holborn in 1924, Sheila Gallagher lived in London her whole life, working in the City since leaving school.

However she is most famous for her role between 1991 and 2010 when she was a school crossing patrol officer, as Lollipop Ladies (and Men) are formally known. She aided the pupils of the City of London School for Boys across the busy artery near St Pauls Cathedral.

In 2004 Mayor Ken Livingstone, thanked her for making an outstanding contribution to life in London on London Day and she was awarded the MBE by the Queen for her services to the community.

For many years Sheila was the only lollipop lady in the City of London, sadly becoming the final one when her role was made redundant with the introduction of a push button crossing.