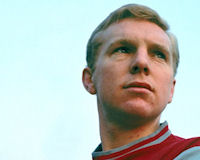 Description: This was West Ham and England legend Bobby Moore's childhood home. Moore refined his skills here, and enjoyed kickabouts with his father and uncle on nearby Greatfields Park.

In 2016, Moore (and this house) became the first footballer to receive a blue London plaque, erected just days before the 50th anniversary of England's 1966 World Cup triumph.

The football hero honed his skills while living at the address, and enjoyed kickabouts with his father - known as 'Big Bob' - and uncle on nearby Greatfields Park.

Moore was the youngest England player to ever wear the captain's armband - at the tender age of just 22 years old. He remains to this day, the only England captain to have lifted the World Cup.

Moore became a club legend at West Ham, for whom he made more than 600 appearances.

The Lord Derby and Football», 2.6km