The Black Madonna of Willesden 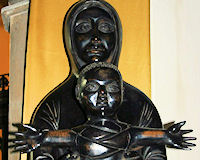 The location of the Black Madonna of Willesden.

Description: This is the ancient parish church of Willesden, dating back to the year 938 when it was founded by King Athelstan. Although it has been rebuilt many times, the building still retains a possibly 11th century font, an early 14th century main door and a 15th century tower.

It was one of the great medieval shrines of Mary, the mother of Jesus, beloved of countless thousands of pilgrims who said it was supposed to possess miraculous powers.

The shrine of the Black Madonna of Willesden was taken in 1538 and destroyed by Thomas Cromwell, Henry VIII's enforcer during the reformation like many other icons across the country.

The striking current statue was produced in 1972 by sculptor Catharni Stern.

Among the numerous wall tablets is a memorial to William Gladstone who worshipped here between 1882 and 1894.

The Church of the Good Shepherd», 8.0km