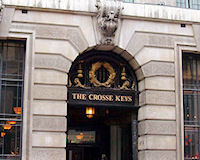 This is where Shakespeares troupe put plays on before the Globe.

Description: The current Crosse Keys, now a Wetherspoons, was rebuilt and opened on the site of an ancient coaching inn of the same name in 1851.

The story goes that during construction a girder gave way causing a portion of wall to collapse killing five workers.

The real fame of the Cross Keys Inn is that Elizabethan plays were performed in the courtyards here between 1576 - 1594. This was one of only four such venues at the time.

William Shakespeare's acting troupe, the Chamberlain's Men, used the Cross Keys Inn theatre on a regular basis because of restrictions on play acting within the City. In 1574 the authorities began regulating theatres paving the way for pure theatre venues such as the Globe to replace Inn's as venues.

Theatrical entertainer William Bankes lived at the Cross Keys Inn on Gracechurch Street, where his act with his performing celebrity horse Maracco, performed regularly. A passage from Tarlton's Jests (1611) says:

The[re] was one Banks, in the time of Tarlton, who served the Erle of Essex, and had a horse of strange qualities, and being at the Crosse-keyes, in Gracious streete, getting mony with him, as he was mightily resorted to. Tarlton then, with his fellowes, playing at the Bel by, came into the Cross-keyes, amongst many people, to see fashions, which Banks perceiving, to make the people laugh, saies; seignior, to his horse, go fetch me the veryest foole in the company. The jade comes immediately, and with his mouth drawes Tarlton forth. Tarlton with merry words, said nothing but, God a mercy, horse. In the end Tarlton, seeing the people laugh so, was angry inwardly, and said: Sir, had I power of your horse as you have, I would doe more than that. What ere it be, said Banks, to please him, I will charge him to do it. Then, said Tarleton: charge him bring me the veriest whore-master in the company. The horse leades his master to him. Then God a mercy horse indeed, saies Tarlton, The people had much ado to keep peace; but Banks and Tarlton had like to have squar'd, and the horse by to give aime. But ever after it was a by word thorow London, God a mercy horse! and is so to this day.

Did Cromwell cross the road», 1.8km