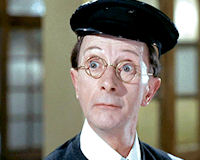 This is where Carry On star Charles Hawtrey lived.

Description: Actor and comedian Charles Hawtrey, star of 23 Carry On films, was born here and lived most of his life here with his mother.

He was born as George Frederick Joffre Hartree here on 30th November 1914, the second son to William John Hartree (1885-1952) a motor car mechanic.

Showing talent for performing at a young age he managed act in West End plays in his teens and had taught himself the piano. His party trick was to play piano and tap dance at the same time.

He carved out a successful film career featuring with many top stars such as Vivien Leigh, but couldn't breakthrough as top billing.

A role in popular sitcom The Army Game brought him to the notice of producer Peter Rogers who was casting the first of the Carry On films. After Carry On Sergeant in 1958 Hawtrey appeared in 22 more, always playing effeminate, weak characters.

He began to resent being typecast in these roles and after caring for his mother who was suffering from dementia (she died in 1965), he took to drinking heavier than previously.

He moved away to Deal where he really annoyed the locals with his constant drinking and poor manners. His funeral was attended by just 9 mourners.