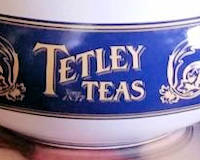 This is where the Tetley Brothers lived after moving to London.

They tried other produce too and soon added tea to their supplies, and grew their ventures and invested, wisely, in the railways.

In 1856, having earlier established Tetley Brothers in Huddersfield, the brothers moved here, a stones throw to the imported tea auction houses on Mincing Lane. This was the absolute centre of the world tea trade with tea clippers arriving at the docks every day with chests full of tea from India.

The pressure was great and eventually the brothers went their separate ways - Joseph went into partnership with Joseph Ackland, and Joseph Tetley & Company, Wholesale Tea Dealers was formed and by 1861 the business employed 18 people.

Edward had gone on his own into the brewery business.

Tetley went on, with the help of future generations of the Tetley family, to be industry leaders in tea.