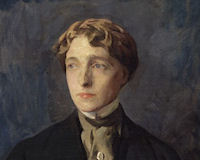 The home of pioneering lesbian novelist and poet Radclyffe Hall.

Description: Radclyffe Hall (1880-1943) was a groundbreaking novelist and poet, best-known for her lesbian novel The Well of Loneliness, which was banned after its publication in 1928. Her former lover Mabel Batten gave Hall the nickname 'John', which she used the rest of her life.

In 1915 Hall fell in love with Mabel Batten's cousin and sculptor Una Troubridge (18871963), wife of Vice-Admiral Ernest Troubridge. Batten died the following year, and in 1917 Radclyffe Hall and Una Troubridge began living together.

Hall was living here with her partner Una when the scandal (driven by a Sunday Express campaign) of her banned novel broke. She lived here between 1924 and 1929.

The book was the subject of an obscenity trial in the UK, which resulted in all copies of the novel being ordered destroyed.