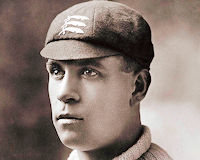 Description: At this point in the grounds of Belmont Primary School is where a small road and 10-house terrace of Jessops Row used to be.

As a teenager he became a Ground Boy at Lords and later, a regular for Middlesex Cricket Club, going on to be capped by England 51 times. In his final last cricket match at Lord's in 1937, Hendren (aged 48), hit 103 against Surrey and was serenaded by the crowd with 'For he's a jolly good fellow'!

In first class cricket he made 170 centuries, a number only equalled by Sir Jack Hobbs, and 57611 runs. In test cricket his average was a very respectable 47. In the winter months Hendren turned his attention to soccer, playing for various clubs, most notably Brentford (400 times, between 1911 and 1927).

Superhoops in the Bush», 2.0km