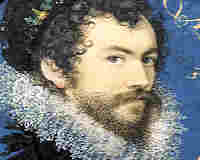 Description: Miniature artist Nicholas Hilliard lived here from around 1580, above one assumes was an inn called The Maydenhead. It had been leased from the Goldsmith's Company, who had Goldsmith's Hall - which is still on Gutter Lane. He had arrived in London from Paris in 1578.

Rowland Lockey (1565-1616) joined the workshop as an apprentice goldsmith, but is better known as a painter.

Another apprentice here as a limner (painting watercolour images on parchment) and miniature portrait painter was the talented Isaac Oliver. He'd moved from Rouen in 1568 to escape persecution during the French Wars of Religion.

Banksy Off His Trolley», 2.1km