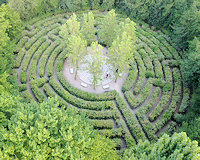 The maze at the centre of the Girl Guides movement.

Description: This large and free hedge maze is in the north of Crystal Palace Park. It was originally planted here in the 1860's and on the 4th September 1909, the Park saw an infamous event. It was the location of the first Scout Rally in which a small group of girls dared to attend.

The girls approached founder Lord Robert Baden Powell, requesting that he set up 'something for the girls', and shortly after he published a scheme for girl guides and 6000 girls joined when the organisations was founded in 1910.

The maze wasn't maintained after the 1936 Crystal Palace fire and the area was finally levelled in the 1960s.

The maze you see today was re-planted to the original design in 1987 by Bromley Council using hornbeam hedges - you might notice that the original Victorian centre post was retained! It again became dark, overgrown, and dangerous and needed a fresh approach.

In 2009 the historic maze was completely redesigned and renovated to mark the launch of the Girl Guide's Centenary celebrations. New artworks and granite monoliths were included.