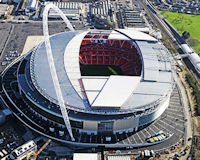 This is the home of the England Football Team.

Description: Wembley Stadium is the home of the England football team and the FA Cup Final (amongst others) situated in Wembley, North London, which opened in 2007.

It is on the site of the original Wembley Stadium, which was demolished from 2002 to 2003. That stadium was built by Sir Robert McAlpine for the British Empire Exhibition of 1924 (extended to 1925), which is why it was originally known as the Empire Stadium.

The first event held at the stadium was the FA Cup Final on the 28th April 1923 between Bolton Wanderers and West Ham United - the famous White Horse Final. Such as event at the new national stadium caused vast numbers of people to cram through the 104 turnstiles into the stadium, far exceeding its official 127,000 capacity. The crowds overflowed onto the pitch as there was no room on the terraces and Police Constable George Scorey and his white horse, Billy, slowly pushed the crowds back so the match could start 45 minutes late.