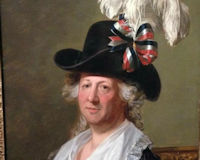 The house where the gender-fluid Chevalier d'eon lived.

He was a diplomat, writer, spy, brilliant swordsman and elegant transvestite. He lived as a man for 48 years before switching to living as a woman for the remainder of his life - when French ambassador to Russia he successfully infiltrated the court of Empress Elizabeth of Russia by presenting as a woman.

In 1762 he was appointed secretary to the duc de Nivernais, awarded 1000 livres, and sent to London to draft the peace treaty that formally ended the Seven Years' War. The treaty was signed in Paris the following year, and d'on was awarded a further 6000 livres and the Order of Saint-Louis - becoming a Chavalier.

He died in poverty and his post-mortem deduced he was intersex.