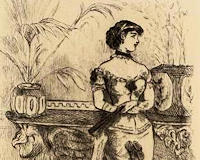 Description: Amy Key Clarke (1892-1980) was a mystical poet and writer, and a teacher at The Cheltenham Ladies' College. She was born here to Henry Clarke, a lecturer and tutor, and his wife Amy, a writer and first headmistress of Truro High School.

In 1917 Clarke stayed for seven weeks with mystic Florence Cunningham at her home in Bayswater. Florence believed herself to be a prophet whom the voices she heard addressed as Mary.

Clarke said miracles happened which were also witnessed by her family during her sojourn in order to try to demonstrate that she was under the control of higher powers. She wrote to Florence on Christmas Eve, 1917, addressing her as My dear Mother.

That year, Clarke wrote a mystical poem Vision of Him which the same year was published in the Oxford Book of English Mystical Verse. In 1950 she wrote on mystical religious philosophy, The Universal Character of Christianity.