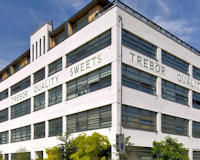 The site of the original Trebor factory, home of Refreshers.

Description: In 1907 four young men set up a new business Robertson and Woodcock here to boil sugar, and make sweets, from sugar bought from Henry Tate in Canning Town.

The four were Thomas King, a wholesale grocer, and William Woodcock, both from Limehouse and a sugar boiler, Robert Robertson, a retail grocer from Canning Town and Sydney Herbert Marks, a sweets salesman from Leytonstone.

By 1915 they became one of the very first manufacturing businesses in London to use motorised transport for their collections and deliveries. Rationing hit them hard and by 1918 the company changed its name from Robertson & Woodcock to Trebor - probably because it was situated next to a row of Victorian terraced residential houses in Trebor Terrace.

In 1935 the Trebor factory produced and launched the iconic Refreshers sweet, and two years later Extra Strong Mints. Both of which are going strong today.