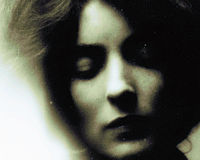 Mina (18821966) was then just 10 years old and she had two younger sisters. Her interest in art was blooming and in 1897 she enrolled at St. John's Wood School, although in later life called it he worst art school in London and a haven of disappointment.

In 1900 she attended the Munich Knstlerinnenverein (Society of Female Artists' School), which was connected with the fine art school of Munich University, before returning to London. She then convinced her parents to allow her to continue her art education in Paris with a chaperone a woman called Mrs Knight.

Nicholas Fox Weber of the New York Times said This brave soul had the courage and wit to be original. Mina Loy may never be more than a vaguely familiar name, a passing satellite, but at least she sparkled from an orbit of her own choosing.