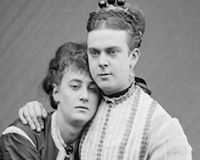 The flat where Fanny and Stella got changed.

Description: Thomas Ernest Boulton and Frederick William Park got changed here at the height of their fame in the late 1860's, the pre-eminent Victorian cross-dressers of their day.

In 1870, while in drag, they were arrested after leaving The Strand Theatre and charged with conspiracy to commit sodomy, a crime that carried a maximum prison sentence of life with hard labour.

The pair admitted to appearing in public dressed as women - an offence at the time against public morals and common decency. They were bound over for two years and became infamous pioneers in gay history.

They rented a flat here to store their dresses, cosmetics and other items, as well as a base from which they went out - the site is now a United Reformed Church. Evidence in their court case included that the police watched this flat for 2 weeks gathering evidence against them.