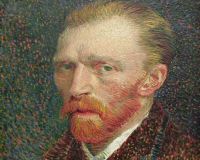 Description: Masterpiece painter Vincent was relatively successful as an art dealer in Amsterdam and in 1873 he was transferred to the London branch of the company and quickly became enamoured with the cultural climate of England.

In late August 1873, Vincent moved to 87 Hackford Road and boarded with Ursula Loyer and her daughter Eugenie. Vincent may have been romantically interested in Eugenie, but many early biographers mistakenly misname Eugenie for her mother, Ursula. To add to the decades-long confusion over the names, recent evidence suggests that Vincent wasn't in love with Eugenie at all, but rather a Dutch woman named Caroline Haanebeek. The truth remains inconclusive.

Vincent van Gogh remained in London for the following year during when he visited the many art galleries and museums and became a great admirer of British writers such as George Eliot and Charles Dickens. Van Gogh was also a great admirer of the British engravers whose works illustrated such magazines as The Graphic. These illustrations inspired and influenced Van Gogh in his later life as an artist.

If Graffiti Changed Anything», 3.2km