Maida Vale for the ladies 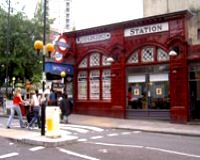 This tube station was originally manned by all female staff.

Description: Maida Vale station opened in 1915 and made history by being the first Underground station to be staffed entirely by women. While the top post (stationmaster) was admittedly still held by a man, he did work at 2 other stations as well.

The station is located at the junction of Elgin Avenue and Randolph Road and for a time prior to its opening the proposed name for the station was Elgin Avenue.

Maida Vale for the ladies», 0km