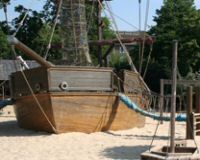 Description: This is a wonderful playground built as a tribute to Princess Diana featuring a pirate ship a native american tepee camp and more.

Designed for children under 12, the playground includes images from the popular children's book, a beach grove, a 50-foot pirates' ship, a tree house, a crocodile, and a mermaid's fountain. The playground was designed to be accessible to all children, including those with special needs.

It's on the same site as one funded by J.M. Barrie, the author of Peter Pan.

The Museum of Childhood», 4.9km