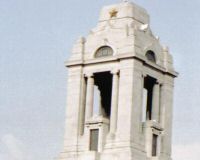 The Grand Lodge of Freemasonry, museum and library are here.

Description: Freemasons' Hall is both the headquarters of the United Grand Lodge of England and the principal meeting place for Lodges in London.

An imposing art deco building, covering two and one quarter acres, it was built 1927-1933 as a memorial to the many Freemasons who died on active service in the First World War. Initially known as the Masonic Peace Memorial, it reverted to the name Freemasons' Hall at the outbreak of war in 1939.

The present Freemasons' Hall is the third to be built in Great Queen Street. In 1775 the premier Grand Lodge purchased a house fronting the street, behind which was a garden and a second house. A competition was held for the design of a Grand Hall to link the two houses. The front house was the Freemasons' Tavern, the back house was to become offices and meeting rooms. The winning design was by Thomas Sandby.

Central to the present building is the Grand Temple, meeting place for Grand Lodge, Grand Chapter and the annual meetings of a number of the Home Counties Provincial Grand Lodges. Masonic bronze doors, each weighing one and a quarter tonnes, open on to a Chamber 123 feet long, 90 feet wide and 62 feet high capable of seating 1,700. The ceiling cove is of Mosaic work and in addition to figures and symbols from Masonic ritual includes, in the corner, figures representing the four cardinal virtues - Prudence, Temperance, Fortitude and Justice - and the Arms of HRH Arthur, Duke of Connaught (youngest son of Queen Victoria) Grand Master 1901-1939, at whose suggestion the Masonic Peace memorial was built. Like Sandby's Grand Hall, the Grand Temple is increasingly being used for concerts and musical theatre - having an almost perfect acoustic and clear sight-lines. 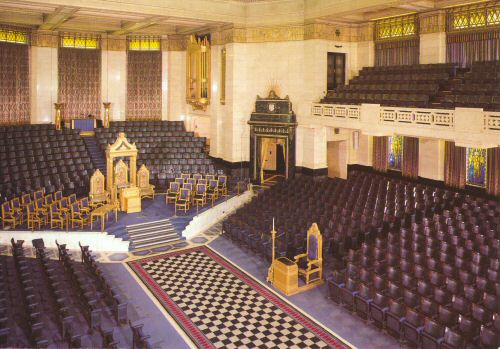