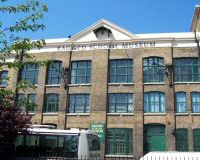 This is where Barnardo's first started caring for poor children.

In 1868, Thomas Barnardo started a ragged school at Hope Place, Limehouse. Ragged schools were free schools for poor children. The pupils' plight prompted Barnardo to open his first home for homeless boys in 1870 at Stepney Causeway. This charity cared for children regardless of their age, faith, colour or disabilities which was very unusual at the time. Between 1880 and 1900, children from China, the West Indies, Africa, India and America were cared for.

By 1875, Hope Place and another ragged school he had opened were condemned due to overcrowding so he needed to rent larger buildings.

Each floor was made into a big classroom with a fireplace, and the loopholes (warehouse doors) were replaced by windows. The basements became the playgrounds. A pediment (triangular structure) was added to the top of the building to make it look more imposing. The separate boys', girls' and infants' schools opened in 1877. By 1879, this building housed the largest ragged day school of the 144 in London.