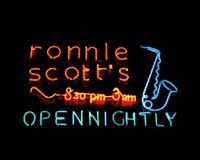 Description: In the summer of 1965 Scott and King found the ideal place, at 47 Frith Street, only a short walk from the old place.

They kept the old place in operation (running at a loss) until the lease expired in 1967 so that the younger British jazzmen could continue to have an opportunity to play and develop.

Perhaps inevitably, because of its reputation, the club has also been the location for many music videos, feature films, T.V. shows and national radio programmes. And in recognition, in 1981, Scott received the OBE for 'services to jazz'.

This is where The Who premiered Tommy to critical acclaim, where Duke Ellington played and saw the last public appearance of Jimi Hendrix.

1» From my perspective the atmosphere at Ronnie Scotts has changed due to the change of emphasis to make money and not music; from my last visit 10/11/07, (and it will be the last) it appears they have now introduced two houses 6-10.30 pm and 11 pm Ã¢â¬â 3 am (Friday & Saturday) inviting you leave (bouncer at hand) at 10.30 if you booked the first house. Not only is this embarrassing and frustrating, because you are just getting into the swing of things, but its clear the artists (I know and have spoken with them) are somewhat embarrassed about it too. Interestingly, some of the artists Ive spoken to, and in some cases have been on the UK jazz scene for over 30 years (no names), now insist they will not play Ronnies again. I have hung on to visiting Ronnies because there is no-where else with that fantastic atmosphere but then there are jazz ghosts in there, and whilst I know things have to change, I find it an incredible insult to Ronnie Scott, and the myriad of fantastic jazz artist and jazz fans who have made Ronnie Scotts what it is; that the current owners are cynically using the history and world wide reputation of Ronnie Scotts to simply satisfy their need for profit. (Les Clappison)
Posted by Les Clappison on 2007-11-14