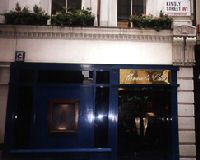 Description: This is where the famous Bag O'Nails pub used to be, legendary music venue.

Paul was at the club with Peter Brown and recalled: I saw this blonde across the room and I fancied her. So when she passed my table I said something stupid like, Hello, how are you? Let me take you away from all this.

Linda commented: It was like a cartoon. It sounds silly, but our eyes met and something just clicked.

Strangely this is also where Fleetwood Mac's John and Christine McVie first met.


14» I remember The Nucleus - it was opened by someone called Cliff (I think) in the early 1950s - I remember giving him a hand with the paintwork and taking him to The Royal Festival |Hall (I had a spare ticket) in his working gear - I had Orchestra Stall seats and someone asked to see our tickets! (smartlady)
Posted by smartlady on 2010-12-24
13» Went to the opening night of Lady Luck Saturday 25th September. Nice club, price of drinks a bit steep, It would would be great if someone know how to turn on the AC, gets very warm down in the basement, staff are great. (Ian)
Posted by Ian on 2010-09-26
12» Yvonne please drop me a email regarding Jimi Hendrix. classicben1959@yahoo.com - Thanks Ben. (Ben)
Posted by Ben on 2010-08-03
11» I was at John Gunnells wedding to Sandy Shenkhein in London in 1968 (I think that was the year. Sandys cousin was 10CC basist and sonwriter Graham Gouldman, who was also at the wedding. I dont think the union lasted, but I left England shortly after and didnt keep in touch. (tonycanuck)
Posted by tonycanuck on 2009-12-09
10» Just found the site and am blown away! I was resident DJ at the DeVere Club in Kensington (above the shops, opposite Royal Gardens Hotel) and used to pop down to the bag at least once a week to compare notes with the lovely Al Needles about the music we had bought that week for the club...almost always American imports, much to the irritation of the owners of the deVere as they cost 3 times as much. What a lovely guy Al was. Was his wife called Mouse? (nickname) can anyone remember. What about Revolution and the Battaclan (Im not sure of the spelling here)..does anyone remember these?? sue one (girlabouttown)
Posted by girlabouttown on 2009-11-27
9» To Emma ODuyts Re the Bag O Nails, Im working on a book on British rock posters...did the Bag produce any and, if so, did your Dad or John Gunnell keep any samples? Wed love to feature one. Would be great if you could get in touch. (wills)
Posted by wills on 2009-09-24
8» The Cats Whisker coffee bar address was No. 1 Kingly Street. (onionspeak)
Posted by onionspeak on 2009-08-26
7» My dad was the manager of the Bag and unfortunately he passed away in oct 03 from cancer. John Gunnell is still alive and well. (Emma Van Duyts)
Posted by Emma Van Duyts on 2009-08-12
6» Steve, is there any way you could get in touch with me please?? Yvonne (Anonymous)
Posted by Anonymous on 2009-04-24
5» Hi Steve...just stumbled in and found your reply re al needles...thank you soo much for the information..Im sad Al is no longer with us..as he was a good friend back then..I would love to see the picture of him with Jimi Hendrix if thats ok..Yvonne (yvonne)
Posted by yvonne on 2009-04-24
4» Yvonne, If its the same Needles who worked at the Speakeasy then he died some years ago. I have a picture of him with Jimi Hendrix but I guess that doesnt move you forward much. Steve (Steve)
Posted by Steve on 2009-03-07
3» Does anyone remember the CATS WHISKER coffee bar also in Kingly Street, just down the road from the Bag o Nails? It was going in the 1950s, and Cliff Richard played there, among others. Do you know the actual address? And do you remember the man who sang downstairs, a song called Hes got the cuttest little dinghy in the Navy? Also, does anyone remember the Nucleus, also a coffee bar in the 1950s, located somewhere in Cambridge Circus? (James Gilman)
Posted by James Gilman on 2008-07-18
2» the bag onails or the bag, was the club i went to almost every night, except weekends when the out of towners filled the dance floor...this was from around 66 til early 69. mario was on the door and al needles was the amazing dj who turned everyone on...does anyone know what happened to him? remember having a chat with linda before she became macartney, in the toilets about her amazing snakeskin boots..and also sitting with jimi hendrix and eric burdon on another occassion. there was also a girl called sadie who was gay and always brought a harem of girls with her. seems like a dream now! was anybody else there at the same time with any similar memories? (yvonne)
Posted by yvonne on 2007-12-29
1» I have been searching for information on the former owner John W. Gunnell? The last I heard he had gone to Australia to work for Robert Stigwood?? Would appreciate any and all info> Thanks in advance. (Sherry)
Posted by Sherry on 2006-11-09