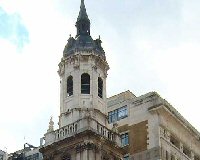 The church that set fire to it's neighbour - Old London Bridge.

St Magnus' was one of the first buildings to be destroyed in the Great Fire of London, in 1666, as it stood less than 300 yards from Pudding Lane, where the fire started. It was rebuilt by 1676, under the direction of Sir Christopher Wren.

Another fire, in 1760, damaged the western end of the church and destroyed several of the buildings on the neighbouring Old London Bridge. Instead of repairing the buildings on the bridge the opportunity was taken to demolish them all to widen the roadway and ease traffic congestion. At the same time a new pedestrian walkway was built along the eastern side of the bridge.

With the other buildings gone St Magnus' blocked the new walkway so the western end of the church was demolished. Rather than demolish the church tower its base was opened out to allow the walkway to pass through it. The open base of the tower now forms the church porch.

The large clock projecting from the tower was a well-known landmark in the City, and would have hung over the roadway of Old London Bridge.

In 1921 two stones from Old London Bridge were discovered across the road from the church. They now stand in the churchyard. In 1931 a piling from a Roman river wall was discovered during the excavation of the foundations of a nearby building. It now stands in the church porch.

The Church of the Good Shepherd», 4.4km

The Holy Trinity and Clowns», 2.5km