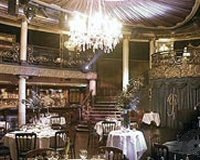 Piccadillys home to the stars and scene of massive wartime bomb

Description: The Cafe de Paris, is one of the most famous and durable venues in the world. With a glittering history, spanning nine decades, the Cafe has consistently played host to a wide variety of powerful and absorbing performers and guests-members of the aristocracy, eminent political figures, royalty, dazzling pop stars, captains of industry, superstars from the silver screen.

Opening its doors in 1924 the Cafe de Paris quickly established itself as one of Europe's premier nightspots. Much of the early success was due to a visit from the Prince of Wales, who became a regular guest bringing with him the crme de la crme of European society.

On March 8th 1941 when two 50K landmines came through the Rialto roof straight onto the Cafe dance floor; eighty people were killed, including Ken 'Snakehips' Johnston who was performing onstage at the time. Ballard Berkeley (who later played the Major in Fawlty Towers) was a PC constable first on the scene who was shocked by the bodies, many unmarked at their chairs, and looters cutting ring fingers off corpses.

Frank Sinatra rubbed shoulders with Tony Hancock, Eartha Kitt with Spike Milligan, Grace Kelly with Noel Coward. Anyone who was anyone was seen at the Cafe.

When Puff Daddy wished to celebrate the European release of his new album - when Sony wished to celebrate 20 years of the Walkman - Prince wanted to throw a secret gig for the elite few - he got on stage at the Cafe. From the James Bond party to the Vivienne Westwood catwalk show to the Spice Girls party to Lennox Lewis celebrating his world titles, the Cafe De Paris is without doubt leading the field.