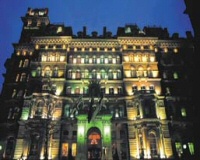 One of the most famous and prestigious hotels in the World.

Description: When The Langham was opened on the 10th of June 1865 by the Prince of Wales (later to be Edward the VII), it was London's first Grand Hotel.

The Hotel took fifteen months to build at a cost of 300,000 pounds and was conceived as the last word in luxury.

Technically the building was a tour de force with its own steam pumped artesian well, hot and cold running water and WC's in the bedrooms, air conditioning, and the first hydraulically powered lifts in the world.

The Prince of Wales continued to patronize the Langham and it was natural that visiting royalty and leaders should take apartments at the Langham. Emperor Louis Napoleon III spent much of his last enforced exile from France at the Langham.

One of the Hotels most famous guests was the romantic novelist Maria Louisa Ramee (penname Ouida) At the age of 28 in 1867 she took rooms at the Langham and would visit the hotel for long periods up until 1887. Ouida lived an exotic life over the many years at the Langham receiving her visitors while lying in bed and writing manuscripts by the light of scores of candles. Under Two Flags, Idalia, Tricotrin and Puck all originated from the Langham.

In 1919 The Langham was the scene of a party given to celebrate the first non-stop flight across the Atlantic by John Alcock and Athur Brown.

The American journalist Henry Stanley stayed at The Langham while preparing his journey to search for Dr. Livingstone in Africa . In 1993, Dr. David Livingstone's great-grandson set out from the steps of The Langham to retrace his ancestor's journey through Africa.


Suave and debonair Noel Coward frequently took up a suite at the Langham when he was working on his pre-second World War stage successes and his witty songs like 'Mad Dogs and Englishmen'.

Haile Selassie, in 1936, became the second emperor in exile to stay at the Langham. He was not restored to the Ethiopian 'Lion of Judah' throne until 1941 when the British drove Mussolini and the Italians out of his country.

The Langham also welcomed Mrs. Wallis Simpson during her courtship to by the Duke of Windsor.

Brigadier General Charles de Gaulle, the self declared leader of the Free French and the man who was ultimately to be President of France, lived briefly at the Langham.

In WWII Winston Churchill, Gen. De Gaulle and U.S. war correspondent Ed Murrow are said to have broadcast from The Langham.

The BBC Radio Programme Palm Court was broadcast from The Langham's Palm Court.

In 1991, Diana, Princess of Wales visited the hotel. The Duchess of Kent and the Duke of Edinburgh have also visited and the hotel remains a favorite of Sarah, Duchess of York. Recent celebrity guests include Shirley Bassey, Rod Stewart, David Hasselhof, Rikki Lake , Elton John, Phil Collins, Rod Steiger and Richard Gere.

Back in the BBC days, journalists at the hotel (then a Hilton) reported ghostly sightings, most of them in Victorian garb and one dressed as a German soldier. Others claim that Napoleon III haunts the hotel basement.

This could be several of the lies journalists came up with to get out of tight deadlines but if you want to check it out for yourself, room 333 is the most haunted.


Architecture Not To Be Missed», 5.3km