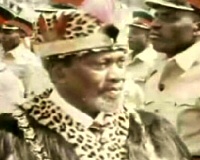 Description: Jomo Kenyatta was born in the area now known as Kenya around 1890, entering politics in 1924.

He came to England in 1931 and lived here while he studied and wrote a book of local Kenyan customs.

He returned to Kenya in 1947 where his party was arrested and jailed for 6 years before being his conviction was annulled.

Upon his return from exile in 1961 Kenyatta was appointed to the legislative
council of the Kenya African National Movement (KANU). The party stood in
the general elections of 1963 and won 67% of the vote, forming Kenyas first
autonomous government. Following the declaration of Kenyan Independence
in December of the same year, Kenyatta became Kenyas first president
a position he held until his death.

Kenyatta died in 1978 in Mombasa and today remains a Kenyan national hero.