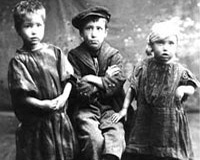 This is where deprived city kids were sent for Summer day trips.

Description: Between 1894 and 1939, 1000 children were brought from London every weekday of the summer to spend a day in the fresh air of Epping Forest, away from the crowded, insanitary streets of east and south-east London.

Over the whole period, more than two million children made the trip by train in school groups. Several royal visits took place here as well including the Duchess of York (the Queen's Mother) in 1923.

The house still stands here in Staples Road in Loughton.

The concept, originally entitled the Fresh Air Fund, was devised by Pearson's Weekly proprietor Cyril Arthur Pearson in 1890, and how confident he was that he could finance the venture through his journal.