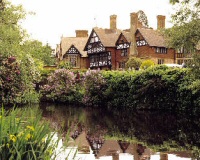 WS Gilbert's Grims Dyke where he lived and died.

Description: Grim's Dyke is most famous for its association with the librettist, Sir William Schwenck Gilbert, the writing half of the Gilbert & Sullivan partnership, who lived in the house from 1890 to his death in 1911.

The name Grim's Dyke comes from an ancient defensive earthwork which runs from Pinner Hill to Bentley Priory.

The House was built there in 1870 for the Victorian Painter Frederick Goodall, who had bought 100 acres of land at Harrow Weald in 1856 but was unable to build for 12 years until the expiry of a lease. During that time he landscaped the area and planted trees, setting aside 30 acres parallel to the ancient earthwork for the house and gardens. Work started on the house in 1870 and was completed in 1872.

The house was designed by Norman Shaw, a well-known architect of the time who also designed the New Scotland Yard building.

On 29th May 1911 Gilbert invited two local girls to swim in the lake. He died attempting to help one of them when she got into difficulties.

Gilbert seems to have lived very happily at Grim's Dyke surrounded by animals and pets, of which there were a great number, many wandering freely about the house. He worked every day in the library where he could look out through the French windows onto the croquet lawn.

Lady Gilbert remained in the house until her death in 1936. Between 1963 and 1968 the house was used as a film and television location. It was Barry & Janine's wedding location in Eastenders for one.

In 1970, when it was converted into a hotel, Grim's Dyke was designated a building of special architectural and historical interest. The present owners took over the property in 1996 when the Grade II listed building was extensively restored and refurbished in the country house style.


1» I saw a ghost there once when playing in the woods (old redding that surround it). It was of a man dressed in old top hat and tails with a moustache. Any stories of ghosts there? He looked in his late twenties, early thirties. (Paul Graham)
Posted by Paul Graham on 2008-05-26