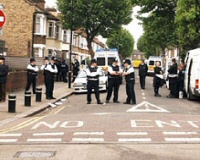 This is the house that the police raided and shot a man in 2006.

Description: On 2nd June 2006, anti-terrorism police raided this house and in making several arrests shot one of the occupants.

The bungled operation headed by MI5 was convinced that the informant had persuasive evidence that a group of men here were plotting to deploy a chemical device in the capital.

Following protests and tension across the capital after recent bomb attacks, the police were forced later to apologise to the occupants.

Famous Drinkers to die for», 9.9km