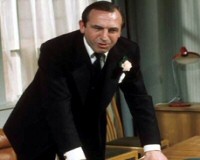 The location of Reginald Perrin's workplace in the TV series.

Description: This is the location of Reginald Perrin's Sunshine Desserts building, where he was frustrated by the futility of modern life.

It starred Leonard Rossiter in the ultimate midlife-crisis sitcom, following the adventures of Reginald as he wakes up to the absurdity of his middle-class existence and job at the Sunshine Dessert factory.

The Goons and Finnegan», 5.4km