St George in the East 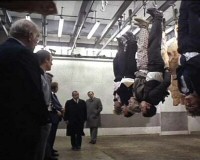 The church in Long Good Friday where Harold's car gets blown up.

Description: This is one of Nicholas Hawksmoor's churches which survived being badly hit during the blitz in 1941.

It was here the 1980 British gangster movie The Long Good Friday that Harold Shand's mum goes to a service and when his Rolls Royce is blown up in the churchyard. Her lucky escape triggered the chain of events in the rest of the film.

A Pyramid in Limehouse», 1.2km

A History of differing Worship», 6.2km

St George in the East», 0km

The Black Madonna of Willesden», 8.5km

Religious Phrase With A Twist», 3.0km