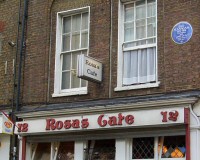 One half of Flanagan and Allen lived here.

Description: Bud Flanagan (1896 - 1968), the comedian and leader of The Crazy Gang lived here with his family. He was born in Whitechapel as Chaim Reuven Weintrop.

He is best known as part of a popular wartime double act with Chesney Allen, Flanagan and Allen.

Flanagan and Allen were both also members of The Crazy Gang, appearing in the first show at the London Palladium in 1931, and continued to work with the group, concurrently with their double-act career.

The Goons and Finnegan», 3.0km

School to an Eccentric Comedian», 4.6km