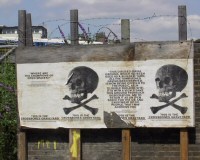 The site of the medieval graveyard of the Winchelsea Geese.

Description: Cross Bones Graveyard was a mediaeval burial ground, situated in St Saviours parish, now Redcross Way SE1. There is a long established tradition that it was a final resting place for Winchester Geese, ie prostitutes, from the legalised brothels or 'stews' of Bankside. This dates back to the days when the Bishop of Winchester ran Bankside and licensed the Geese.

Stow, in his Survey of London in 1603, describes the burial site as being appointed to single women forbidden the rites of the church so long as they continued a sinful life. However, by Victorian times, when the area was stricken by poverty and disease, the site was used as a paupers burial ground.

Cross Bones Graveyard was finally closed in 1853 on the grounds that it was completely overcharged with dead and that further burials were inconsistent with a due regard for the public health and public decency. A warehouse was built upon it.

Recent archaeological digs for the Jubilee Line extension have uncovered evidence of a highly overcrowded graveyard where bodies are piled up on top of each other and tests have shown that many of the bodies are women and children with diseases ranging from smallpox, TB and pagets disease to osteoarthritis and vitamin D deficiency.