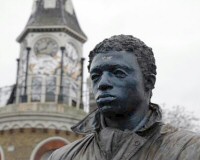 The statue of the perpetually waiting man at Brixton Station.

Description: A man and his bag have been leaning on the wall at the back of a platform here at Brixton Rail Station since 1986.

His perpetual waiting has always struck a chord with frustrated commuters passing through and alighting here.

1» There are in fact 3 of these statues on the station. the other two are both of females one is opposite the one above and one is noe hidden behined the fenced off area this shows the one that is still visible http://www.flickr.com/photos/lesbailey/3204250888/ (Leslie Bailey)
Posted by Leslie Bailey on 2009-01-19

The Statue that Copies You», 37.km