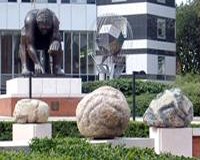 Description: Here, rocks from the glacial plain of Southern Sweden provided the raw material for the Poets Circle's Planets, which consists of eight, one-tonne granite boulders carved with the outlines of a variety of human bodies in the act of clinging onto them. Each of the works are set on plinths around the Poet's Circle on the Library's Piazza.

They are all of a certain dimension, which is basically body-sized. And they are all the shape that being the ball-bearing of a glacial cap makes them, which is rounded and smoothed, but still crystalline and jagged.

Rather than try to do what Michelangelo did and find an idealised human form inside the stone, I've done it the other way round. The form of the stone is what dictates the attitude of the body. What you see is the outline of a body hanging on to this bit of the material world.

Only one of the bodies is Gormley's. The others belong to friends, relations and anybody I could persuade in the worst time of the year to be hugging rocks, because this was done in January and February.

Each stone has a different body attached, and each person who participated found their favourite position in relation to their stone. The idea is that each stone has the evidence of a moment of someone clinging on to it. It's a silhouette of the kind that would be taken at the scene of a crime around the body lying on the floor, so it gives the evidence of an actual event having taken place.

But I went on cutting as deeply as I could while retaining the original form of the stone. Essentially, the basic premise is to talk about the dependency of the human body on the material world in a building that is devoted to the fruits of the mind.