Where Oscar Wilde was arrested 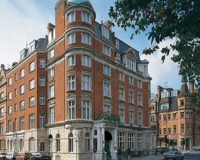 The London hotel where Oscar Wilde was arrested.

Description: The 65 rooms hotel is infamous for being the venue where Oscar Wilde room was arrested, and one of the suites is named after him.

The Cadogan Hotel, built in 1887 in Londons SW1, off Sloane Square, was soon to find itself at the heart of Victorian societys most infamous indiscretions. Within the walls of this most stately of West End London hotels, some of societys pre-eminent figures came together in a tumult of controversy.

Society beauty, courtesan and actress Lillie Langtry lived at 21 Pont Street from 1892 to 1897. Even after she had sold the house, Lillie would stay in her old bedroom, by then a part of the hotel. It was at The Cadogan that Lillie would court Edward, the future King of England. Langtry's is now a restaurant within the hotel.