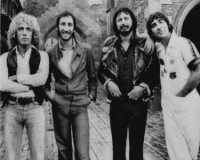 The place where Keith Moon auditioned for The Who.

Description: This is the old music pub where The Who's Keith Moon auditioned for them.

They were playing with a session drummer and someone walked up and told John and Roger his mate can play better than the session drummer. Keith walked up with dyed ginger hair, a brown shirt, brown tie, brown suit, brown shoes and he just looked like a little gingerbread man. Hence his nickname within the band was born.

He was asked to play Roadrunner, and needless to say, Moon proved his worth, claiming his favourite drummer was Buddy Rich, but he also liked the British bandleader Eric Delaney who used twin bass drums.

He failed to mention until much later that he was an obsessive fan of Californian surf music. The band he was playing with was called The Beachcombers. Keith had been taking lessons from Carlo Little, the drummer with Screaming Lord Sutch, a novelty performer from the previous wave of bands from the small gig circuit.

Keith was an eccentric player, and seemed to be showing off all the time, pointing his sticks up in the air and leaning over the drums with his face thrust forward as if to be nearer the front of stage. But he was loud and strong. Slowly too we realized that his fluid style hid a real talent for listening and following, rather than just laying down a beat.