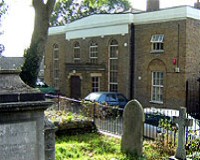 The school where Darwin's Patagonian Indians were educated.

Description: This building now used as a community centre used to be St Mary's School, infamous for schooling three Patagonians who had travelled with Darwin.

On that initial journey Fitzroy had taken four local 'savages' from the southernmost tip of the continent, known as Tierra del Fuego, as retribution for the stealing of one of his whaling boats.

As hostile as the captain's conduct may seem, his motives were largely 19th Century benevolence: Fitzroy planned to ferry his four captives back to Britain and school them in the ways of Christianity and gentility. He then planned to return them to their homeland in the belief they would spread their newly instilled values through this dark continent.

The four were an incongruous bunch, spanning in age range from nine to 26, with an equally motley collection of names given them by Fitzroy.

Fuegia Basket, the youngest and the only female, was named after Basket Island;
Jemmy Button, aged about 14, took his name from the pearl button he was exchanged for;

Boat Memory, who was about 20; and
York Minster, who was named after a hill that had been likened in shape to the ancient city's cathedral.

When the Beagle set sail from Plymouth for the south Atlantic in 1831, with Darwin in the charge of Captain Robert Fitzroy, it was taking the three surviving young Patagonian Indians home after the bizarre social experiment.

Fuegia, Jemmy and York adapt so well, that within nine months they are presented at the court of St James what triumph!