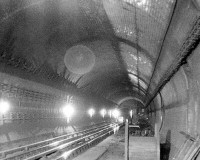 The disused ghost station prevalent in many films & books.

Description: The British Museum station closed on the 25 September, 1933. There was a local myth that the station was haunted by the ghost of an Ancient Egyptian. Dressed in a loincloth and headdress, the figure would emerge late at night. The rumour grew so strong that a newspaper offered a reward to anyone who would spend the night there. No one attempted to do this!

The story takes a stranger turn after the closure of the station.

The comedy thriller, Bulldog Jack, was made in 1935 which included a secret (fictitious) tunnel from the station to the Egyptian room at the Museum. The station in the film was called 'Bloomsbury', and in all likelihood was a stage set, but it was based on the ghost story of British Museum.

On the same night that the film was released, two women disappeared from the platform at Holborn - the next station along from where British Museum was. Marks were later found on the walls of the closed station. More sightings of the ghost were reported along with strange moanings from the walls of the tunnels. Eventually the story was hushed up as London Underground has always denied the existence of the tunnel from the station to the Egyptian Room.

However the lead character in Keith Lowe's novel Tunnel Vision resurrects the story to impress/scare his girlfriend with tales of tube horror.

If you listen carefully when you're standing at the platform at Holborn, sometimes - just sometimes - you can hear the wailing of Egyptian voices floating down the tunnel towards you.

It's also mentioned as the station where the monstrous humans who prey on commuters lost at night kept their decaying corpses in cave in the cracking 1970's B Movie Death Line. Although it wasnt filmed here.