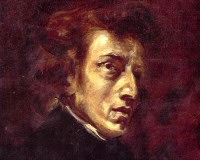 This is the house where Chopin left for his last performance.

Description: It was from this house in 1848 that Frederic Chopin 1810-1849 went to Guildhall to give his last public performance.

At this last concert on 16 November 1848, nearing the end of his long struggle with tuberculosis, in a final patriotic gesture, Chopin played for the benefit of Polish refugees.

The great author James Fenimore Cooper (Last of the Mohicans) lived here, and according to James Grossman, Susan Cooper had danced once in a great Parisian house to waltzes played by Chopin and Liszt while the hired musicians were at supper.