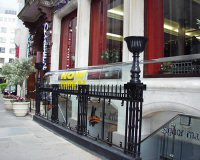 One of the most infamous anti-gay events in history.

Description: The public house/private club the White Swan was only open for 6 months in 1810 before it was raided for sodomy and attempted sodomy. Eight men were eventually convicted.

Two were hanged (as per the then still extant sodomy laws promulgated by Henry VIII in 1534) and six were pilloried for this offence.

in early 1810 by two men, James Cook (not the seafarer) and Yardley (full name unknown), who realised the lack of gay brothels in the city offered a business opportunity for them (Yardley claimed to be straight and had a wife, purely in it for the money).

The club had been operating for less than six months when, on 8th July, 1810, it was raided by the Bow Street police. 27 men were arrested, but in the end the majority of them were released (perhaps as a result of bribes) and only eight were tried and convicted.

The entire history of the White Swan and the Vere Street Coterie were related by the lawyer Robert Holloway, who published a book about it called The Phoenix of Sodom in 1813.

1» I am doing a research project on the Vere Street Coterie, any information anyone could forward would be much appreciated (Amanda Dennis)
Posted by Amanda Dennis on 2007-09-11