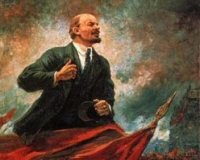 Revolutionary Lenin stayed here while working as editor on Spark

Description: Russian Revolutionary, Vladimir Ilyich Lenin, made his home here on his visits from Russia where he was in exile.

In 1902-3 he lived with his wife, Krupskaya at 30 Holford Square, while editing Iskra (the Spark) nearby at 37 Clerkenwell Green (at the time housing 20th Century Press - now the home of the Marx Memorial Library).

It was from this address that Lenin wrote his first letter to the Director of the British Museum requesting permission to study in the Library.

The letter, dated 21 April 1902, bears the signature Jacob Richter; the pseudonym which he had adopted to throw the Tsarist police off his track. The reference required by the Museum authorities was supplied by the General Secretary of the General Federation of Trade Unions, I. H. Mitchell, but this did not satisfy the Admissions Office as Mitchell's home address could not be found in the London street directories. Lenin wrote again enclosing another recommendation from Mitchell, who this time used the address of his union's headquarters. The following day Lenin was informed that a Reader's Ticket would be granted to him, and four days later, on Tuesday 29 April 1902, he signed the Admissions Register and was issued with ticket number A72453.


Embassy of Ecuador and Assange», 3.0km